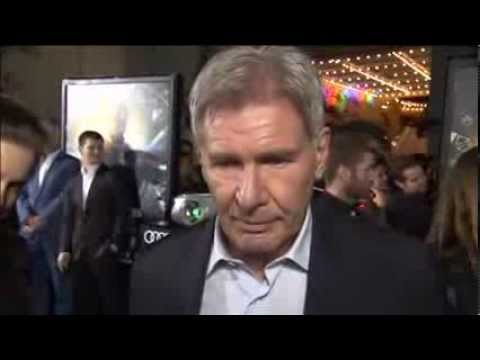 “It posits or it proposes a world in which war is fought remotely as in drone warfare, and youngest members of our society, the most bright and able, are proposed to have the capacity from video gaming, and also because the young people appropriate information so much more quickly than the older people,” said Ford, on the film’s plot. “They’re judged to be the best soldiers for this kind of war.”

“We have these huge statements like ‘go into the cave and smoke them out,’ and ‘let’s beat them up’ or whatever, not knowing that there are emotional ramifications to that, that we’ve seen,” said Davis, on the effects of warfare on young people. “Post traumatic stress disorder, these young people coming back, double amputees, you know. People who are bullying, who are actually killed afterwards. It used to be back in the day, I beat you up, you beat me up, and then we became friends. It’s not the same anymore. I’m not an advocate for violence.”

The film, based on a novel by Orson Scott Card, follows an exceptionally intelligent child, Ender, who is sent to train as a military specialist to organize the fight against future alien invasions. Butterfield stars as Ender.

“I think for me, what’s really helped, is living in London has really helped me to stay very distant from all the pressures of Hollywood and in the film ‘Ender’s Game’ there is quite a bit of pressure put on the character,” said Butterfield, on how he related to Ender personally. “I guess it’s something I can relate to him, as a young actor there are pressures.”

A trailer scene in “Ender’s Game” shows Ender directing explosive large-scale warfare in space, while adults in the dystopian world marvel at his skills.

“You see that these characters are placed into this world where they don’t know necessarily how to handle the situation that they’re in and to their knowledge no right or wrong way,” said Steinfeld, on how the film celebrates the intelligence of young people. “So the way that they are able to handle themselves so gracefully, it really focuses on that. I think there are so many people of all ages out there in the world in some situation that’s similar to these characters’ situation to some degree, and the way that they handle it is really incredible and I love that that’s really focused on.”