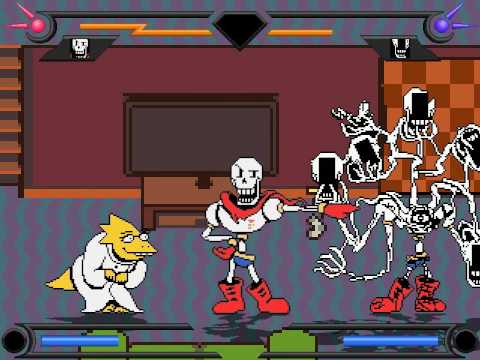 So, a person going by the username Mickes released a P A P P Y character from Help_Tale. It may look like an edit of FourthRhyme’s Papyrus, but in actuality, it was made from the ground up using KFM as a base, which is considerably impressive. Being built off Kung Fu Man, P A P P Y uses the standard four button layout for it’s basic attacks. Moveset wise, P A P P Y has a considerable amount of specials and hypers, most of which cover a fair portion of screen, but can be guarded. The attack damage isn’t a problem, but the main problem is the combination of the high defence stat and lack of a custom AI; The default AI mostly blocks player attacks, combined with the character’s 300 defence stat makes battles drag on a bit. This can also give players a somewhat unfair advantage over opponent with low damage outputs. Overall, the character is decent. It sticks to the source materials with well done sprites and moveset, but takes forever to take down, which will only bore impatient players.

(Yes, I am aware I recent passed over 200 subscribers, but I wanted to get this video out before my 200 sub special)

I thought that it was only papyrus

Sans killed six bones in the last round ;/

I didn't ask for this…

He faced his fear

The pre-battle segment is perfection.

What did I watch ÓwÒ

Your drawing is too good!

Pap sent that thing back to the abyss.

Papyrus turns into a tornado!

Everything is H A P P Y

I hope people understand that papalgamate is every single papyris from all the alternate universes, so this isn't possible

You would expect papalgimate to acually win XD

i need sans vs sanstrosity

What is happening to your eyes pappy…..

I think we should give this video 666 likes