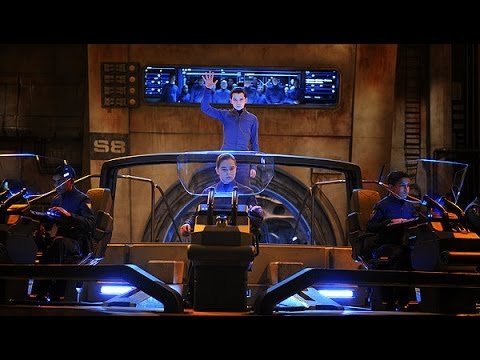 See what other critics are saying:

In the near future, a hostile alien race (called the Formics) have attacked Earth. If not for the legendary heroics of International Fleet Commander Mazer Rackham (Ben Kingsley), all would have been lost. In preparation for the next attack, the highly esteemed Colonel Hyrum Graff (Harrison Ford) and the International Military are training only the best young children to find the future Mazer. Ender Wiggin (Asa Butterfield), a shy, but strategically brilliant boy is pulled out of his school to join the elite. Arriving at Battle School, Ender quickly and easily masters increasingly difficult war games, distinguishing himself and winning respect amongst his peers. Ender is soon ordained by Graff as the military’s next great hope, resulting in his promotion to Command School. Once there, he’s trained by Mazer Rackham, himself, to lead his fellow soldiers into an epic battle that will determine the future of Earth and save the human race. Based on the best-selling, award winning novel, ENDER’S GAME is an epic adventure which stars Asa Butterfield, Hailee Steinfeld, Ben Kingsley, Viola Davis, with Abigail Breslin and Harrison Ford. — (C) Summit

Support What The Flick?! for FREE by doing your Amazon shopping through this link (bookmark it!)

+ddaug314 I completely agree, although this would be better on a pay channel such as Showtime instead of Syfy for a bigger budget.(assuming there is an audience). I think because Ben didn't read the book he completely missed the point. If you read the book you get to see just how smart these kids really are particularly Ender's siblings.

Half the book is missing, would have been better served 3 or 5 part mini series on the sci fi channel or hbo

its not so much it was humourless, it was just dull.

Humorless? The movie is about two species struggling to commit genocide on one another first and child soldiers who are pushed to make excruciating decisions. I wonder if Ben has ever seen Blade Runner or ANY other serious sci-fi movie?

This movie just sucked. For a movie that exposition-heavy there needs to be some pay off. Not a poor looking CGI destruction fest and then Ender whining about some aliens.

Ben needs to calm down lol. Ender's Game was whatever. I didn't hate it but I didn't like it. It was not very memorable. zzzzzzz

Seriously, for me the argunment that the movie is bad because the way the kids talk is not fair. Any kid as smart as these ones on the movie, would act like that. This is the dream of a lot of children, comand his/her own army, fight evil and etc. C.S Lewis said once that if you are writing an adventure about kids, don't treat them like "kids". This is not a rule, but a style. I love the book and I didn't loved the movie but I liked it. The "simulator" scenes are quite amazing and I love the way they talk, in some ways remembered me of Star Trek. I think the movie had other flaws that he could have said, only the argument that the movie sucks because of the way kids talk, for me, is no valid.

Ender's Game is a great film!!!

I love how google captions translates 'aliens' as 'Italians' lololol..

Oh and the movie sucks.

Ben, attention to detail is what you lacked the most in this review. How can I respect your opinion as a reviewer when you can't get the publishing date of the book right (not even in the same decade) not to mention, Harrison Ford plays Colonel Graff. As it said a bunch of times in the film.(Not General) This review holds no weight to it because of bee's lack of attention to detail and his lack of respect for the source material. I'm sure Ben is an absolute pro at reviewing porn, but real cinematic film, leave it to the professionals.

this movie was amazing!

given the anti-war message I thought tyt would like it.

Ben's commentary, as usual, is useless…

what type of rating system does what the flick use? is it a 1-10? because I never see them give anything higher than a 5

Didn't south park do this plot with the "PSP"

yeah, it was SUPPOSED to be a serious movie. child soldiers committing genocide? god damn you people, this is a really horrible review.

I gave the movie a 7.   Decent acting, good story, great effects.  Not enough time to develop Ender and his family and why to care about him…. but the director and screenplay did enough to show the main points of the story.   Go watch the movie and enjoy it for what it is….. a good story about a young boy who is ultimately manipulated by the powers in charge to do what he ultimately would  not have done otherwise.

damm these critics are old…..

I'm surprised Ben even bothered to watch the movie this time, I guess even freeloading bums put in effort once in a while.

It sounds like the author watched The Last Starfighter and then wrote Ender's Game the following year.

Enders game is just the start… the book series goes so much beond it..

the first book is a very minor thing… its the whole of the rest of the enderverse that awsome..

Starship troopers is a TERRIBLE book Alonzo are you kidding? It has no plot it's agit prop for Heinlein. Are you kidding me? I can't believe you said it. Enders game is like 100000000x better.

You frickin bigot, do you realize that this "stupid" book is one of the greatest Science Fiction works on the 20th century? The Marine Corps has it on their reading list! Please, culture yourself before you say such completely moronic things.

I really liked the movie. It made me think about many things. The conflict of if it is right to kill the formics is very powerful to me. And look at things today, kids are talking more and more like adults and at younger ages every year. Kids would be talking like they are sixty in those times. And honey boo boo is shit, when I saw honey boo boo I thought of child abuse and plastic. This makes me think if love, war, anger, death, and life. Don't watch a movie if ur gonna be negative about it

Sorry Ben, your personal bias towards kids talking in grownup terms (your reference to honey-booboo,) is completely off the mark here.  If you had read the book you would understand why this is important.  You didn't listen to Matt at all.
Obviously every book-to-movie leaves out important information but calling the dialogue stupid is ignorant.  just my 0.02.

the movie was utter garbage.  they basically read the book cover and went with that.  they completely changed almost every person for the worse cut out major plot points and utterly destroyed the whole point of the story.

I think the idea of making this movie was great, but I would have to say who ever directed this movie should be shot lol, I think m night shyamalan would have been a much better choice, I think he can remake this, I think I am gonna get more enjoyment outta the shit I am about to leave in my toilet then watching this again

In the book, there is some dark humor, like when Anderson and Gaffe say that if they fail and destroy Ender, it will not matter because they will not be around to see it and when the pilot that takes them to the asteroid base says that he is not sure if he is allowed to know where this hidden military base is, Gaffe essentially says, "Well, you're not. You were the fastest ship in the spaceport, so we took your ship. I hope you don't mind staying on a remote base away from your friends and family until the war is over. Because that's what's going to happen." The book shows more of the dichotomy between Ender (who is grim and determined and <alone> at some points just gives up) and the rest of the world (they have fun and joke with their other genius friends; they work with Ender). Also the other Battle School students use slang ("toon" and "Jeesh"). Ender is just manipulated into being the perfect commander.

Im sorry but this is a really bad movie review. could the guy on the right be anymore infantile. in all honesty he should not be reviewing anything, let alone movies. How dare you compare Ender's Game to honey boo boo. at least now i know where not to go to get a legit movie review. THANKS FOR NOTHING.

these 2 are complete idiots, how did u read the book? in chinese? u stupid fk, -1 subscriber.

Agreed Movie feels fake. Couldn't get into it. Two words to describe it ridiculous and cheesy

Orson Scott Card is a known racist and has anti-gay views but The Young Turks "What The Flick" seem to give him validation by a movie review and not saying sumthing about his views. I thought better of you TYT.

I don't know. I really liked it. Having never read the book and being a fan of sci fi I just really enjoyed it. I like stories where the main character uses intellect rather than strength to succeed. The fact that he was a kid didn't really bother me. I do agree that the other kids who were supposed to be geniuses did seem stupid. The very end of the movie did feel forced but overall I really enjoyed it. It did have a starship troopers vibe(although it's not as good as starship troopers). Overall I enjoyed it and I will watch it again when it's out on dvd.