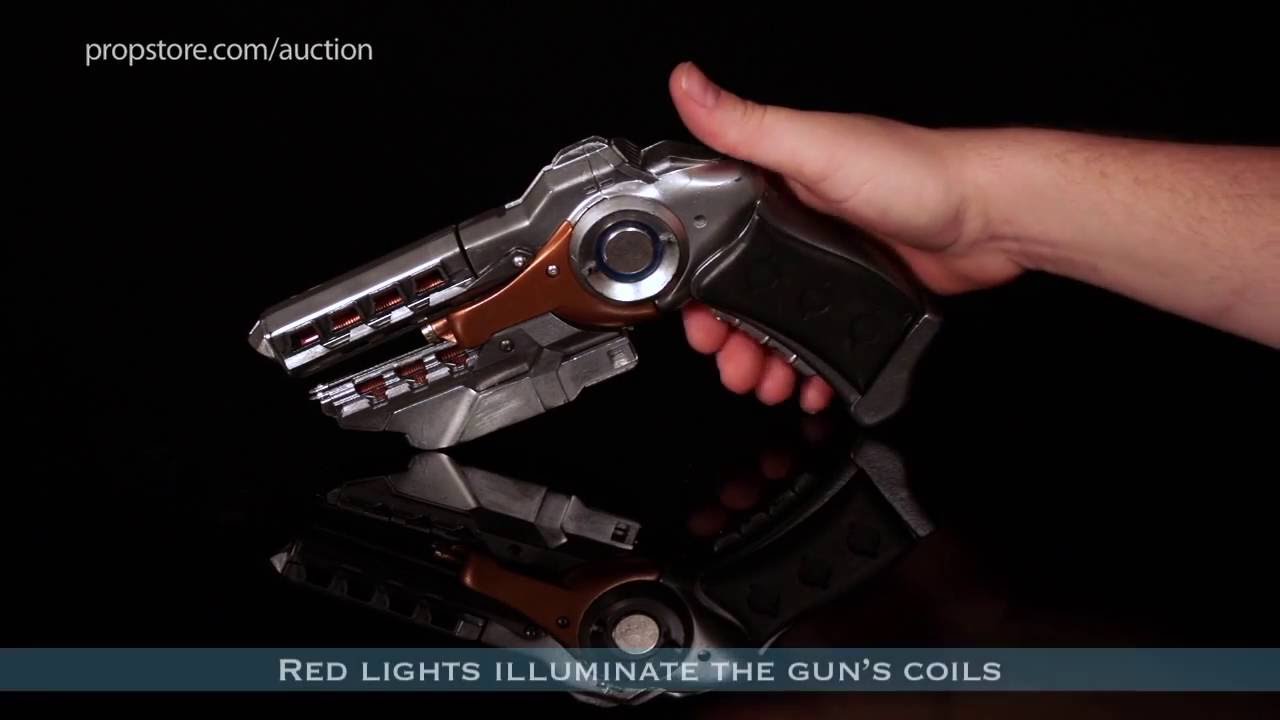 A Light Up Flash Gun and Charger from Gavin Hood’s 2012 Sci-Fi adaption Ender’s Game. In the film, Ender Wiggin (Asa Butterfield) is recruited to lead the International Fleet against the alien Formic race. These guns were made for use by the young cadets when training in the zero gravity Battle Room. The guns were mounted to a charger inside of a lockers and attached to the thigh of their Flash Suits via magnets and were used to freeze their opponents.
The gun is made largely of molded and 3D printed resin pieces. The piece features sequencing LED lights that operate when the trigger button is held down. Blue lights travel in a circle around the core magnet of the gun on both sides and a five light indicator sequence can be viewed by the shooter on the back of the gun. A button located where a regular gun’s hammer would be activates a white strobe to simulate the gun firing. The gun is powered by two 3V batteries housed in the butt.
The charger is made of molded resin painted with silver acrylic and features a raised magnetic mount in the center surrounded by six LED light slits. A circular set of magnets are placed on the rear of the fixture so that it can be attached to metallic surfaces. A silver switch and raised red button are on either side of the item. The LED lights are activated by pressing the red button and include several blinking sequences. Flipping the switch will change between green or red LED lights.
Due to use, some pieces of the flash gun are somewhat loose, specifically the small brass cylinder in between the two barrel portions. Aside from this and a few minor scratches in the paint from use the gun, measuring 10” x 7” x 1” (25 cm x 18 cm x 3 cm), and the charger, measuring 4” x 4” x3” (10 cm x 10 cm x 8 cm), remain in good condition.